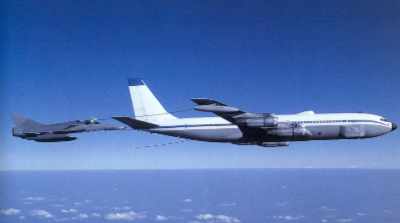 These aircraft were to be the largest ever flown by the SAAF and with the furthest range and longest endurance.

In the interim 60 Squadron, a famous WW2 photo reconnaissance unit which flew Mosquitoes in the Italian Campaign was reformed to operate the type. New hangars and facilities were built at AFB Waterkloof and, after ministerial approval had been granted, the squadron was officially reformed on 16 July 1986.

The first EW flight was carried within 6 months of the squadron’s activation and the first in-flight refuelling of Mirage F1AZs was carried out on 5 March 1987.

The first operational sortie was flown from AFB Grootfontein in SWA over Angola on 8 September 1987 during Operation “Moduler”.

A further two aircraft were later acquired, both actually being ex-South African Airways and Safair! The first was fitted with a locally developed removable airborne communications system while the second was delivered in a cargo-carrying configuration and was initially earmarked to be fitted out as a Presidential VVIP transport. 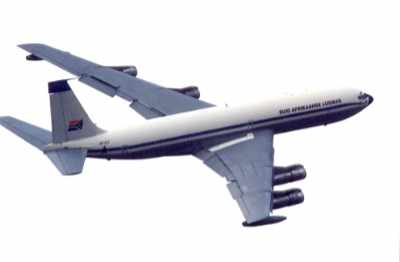 The Boeing 707s flew a number of long-range flights to the United Kingdom, Chile, Brazil, Haiti, Russia and finally to Sweden for refuelling trails with the SAAB JAS 39 Gripen.

They also flew a number of humanitarian and peace support missions – to Rwanda, to Mozambique in support of the local national elections during Operation “Amizade” and the Congo. Its long-range capability also allowed it to make non-stop flights to Marion Island and Antarctica.

Of the five aircraft operated by the SAAF one was sold and exported to the USA, one was scrapped, the forward fuselage sections of two were removed and are preserved – one at the SAAF Museum and the other at the SA Airways Museum and number 1419, having flown a total of 46 433 hours over its lifetime, was delivered to the SAAF Museum on 02 November 2007 where it remains on public display.