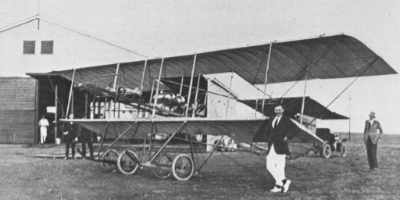 British pilot Cecil Compton Paterson established the Paterson Aviation Syndicate at Alexandersfontein in 1913 and was given the contract to train ten pilots for the then Union Defence Force’s newly authorised South African Aviation Corps. The original aircraft was destroyed in a crash and Paterson, along with his pupils, built a new aircraft from some of the salvaged remains. This aircraft crashed in that October and he purchased another from one of the civilian pupils in order to complete the contracted training. Six men were eventually sent to England for advanced training with the Royal Flying Corps in April 1914 and a few months became the first South Africans to serve in WW1.

The Pioneers of Aviation Museum was opened in October 1981 through the joint efforts of the McGregor Museum in Kimberley and the SAAF Museum.  The replica aircraft was constructed by members of the SAAF Museum’s workshop, then based at Lanseria Airport, from plans drawn up using original photographs and a few dimensions discovered in a period aviation magazine.

The memorial alongside the reconstructed hangar contains the remains of Edward Cheeseman, a British instructor who was killed in the first crash and who achieved the distinction of being South Africa’s first recorded flying casualty. Stones brought from SAAF Association branches around the country were incorporated into the memorial as well.

The guest of honour at the unveiling was Maj Gen (ret) Kenny van der Spuy, the last of the original ten pilots who underwent training there and at the time of his death at the age of 99 in 1991 was the world’s oldest living pilot. His remains were also subsequently interred in the memorial.

Staff from the SAAF Museum at AFB Swartkop recently paid a visit to the museum while on official duties and re-established ties with the McGregor Museum. Embracing our collective aviation heritage we salute those intrepid airmen who paved the way for the establishment of the SAAF.