It was introduced in 1915 and powered many British single and twin-engine military aircraft. Altogether nine variants of the Eagle were built, 3 302 examples of the Eagle VIII of 300hp being built at Derby between 1917 and 1922. 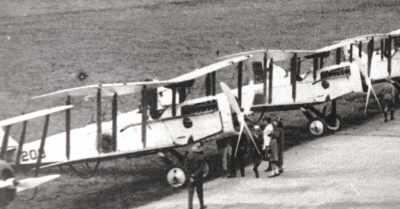 Apart from the Vickers Vimy “Silver Queen” with which van Ryneveld and Brand began their flight from England to Cape Town, the Eagle also powered the de Havilland DH4s which formed part of the Imperial Gift.

This engine, serial number 6746 was one of the two engines which were installed on the “Silver Queen” and “Silver Queen II”. It was salvaged and sent to the Aircraft Depot and held in storage, having run a total of 110 hours since new.

The original logbook had been lost and a new logbook was opened during August 1925 when the engine underwent a complete overhaul.

The overhaul was completed in 1926 and the engine was issued to the Central Flying School at Zwartkop Air Station in October 1928. 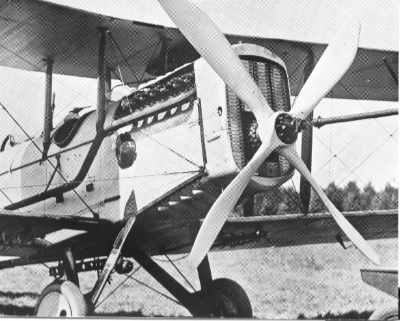 Photo right: Close up of the front section of a SAAF De Havilland DH4
showing the large front-mounted radiator and 4-bladed propeller made up simply by mounting two 2-bladed propellers together.

Photo right:It was installed in DH4 no. 210 on the 13th, only for the aircraft to crash at Z.A.S. on 6 November 1928. Both aircraft and engine were returned to the Aircraft Depot on 15 November, the DH4 being struck off charge the following year and the engine undergoing a servicing, having flown some 9 hours 20 minutes in the DH4.

The engine was installed in DH4 no. 209 on 15 December 1928 and issued to the Central Flying School at Z.A.S. on the 19th. The aircraft force-landed at Z.A.S. and was eventually struck off charge while the engine, having flown a total of 213 hours and 25 minutes, was removed on 13 October 1929 and issued to the Air Depot. It was placed in storage, from where it was presented to the National Museum in Bloemfontein on 25 November 1936.

The engine is currently undergoing refurbishment by members of the Port Elizabeth branch of the Friends of the SAAF Museum. 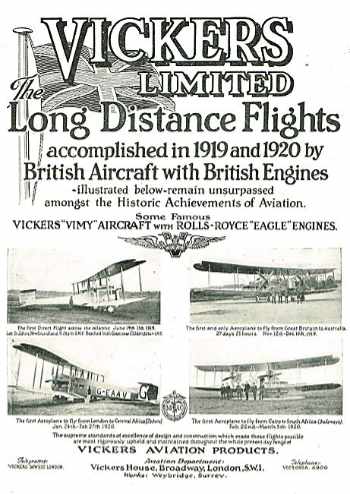 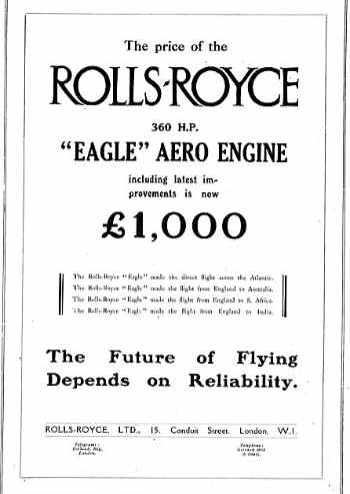 Above: Advertisements for the Rolls-Royce Eagle and Vickers Vimy which appeared in British aviation magazines of the time, with the companies proudly announcing their products’ long distance flight achievements

It is one of three known examples in South Africa; one is on display at the Ditsong National Museum of Military History in Johannesburg while the other is displayed at the SAAF Museum at AFB Swartkop. 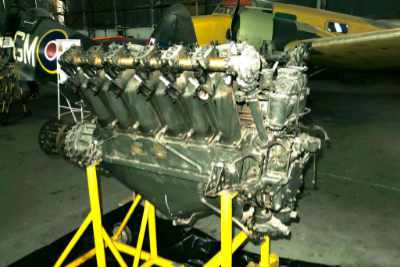