Following the determination of the national security requirements of the time, it was deduced that the installation of radar systems would provide much needed security for the gold mines and the rich industrial complex in the triangle formed by Johannesburg, Vereeniging and Pretoria. Thus an effective Air Defence System was recognized as being essential to the defence of the country. Furthermore, it was a consensus that as a deterrent to a country's potential or would-be enemies, radar systems would protect the valuable investments and assets for the future.

The geopolitics of the time, influenced mostly by the Apartheid policies of the nationalist government, placed the country in a vulnerable state and possible surprise air attack from states to the north. Influenced by these and other future threats a  decision was taken by the General Staff (today’s Defence Force Command Structure) “to install a chain of radar stations along the common border of Transvaal and the countries of Mozambique, Rhodesia and Bechuanaland to provide early warning of any aircraft penetrating the Transvaal airspace”. This was code-named “Project Natsec”.

The successful operation of the radars required suitable sites and the erection of communication networks which would allow linkage between the radar site with Air Force Station (Base) Waterkloof and each other. Following a map study and site selection, Mariepskop was identified as a suitable position to implement Project Natsec. Mariepskop presented a clear and uninterrupted radar view to the north and east of the Drakensberg Mountain.

Mariepskop existed long before the Air Force navigated its way to the mountain top. There is also a probability that indigenous people lived there before the Air Force thought of building a domestic area. The name, Mariepskop could have been influenced or informed by the historical activities of the Chief of the Mapulana tribe, Chief Maripe Mashile whom is believed to have used the mountain's fastness to his defence. It could also be argued that the Air Force chose the mountain for similar reasons as Chief Maripe. Whether the Mariepskop, as we know it today, was named after Chief Maripe or not, poses as an interesting research study on its own. 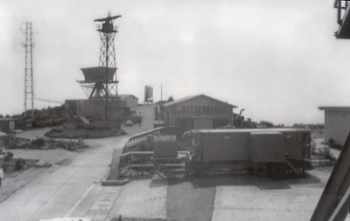 The map study was followed by a physical survey of the area. Major General (Captain at the time) Tom Cockbain and Corporal Bill Franke successfully negotiated their way to the tableland of the mountain. “We had to hack our way through indigenous forest choked with undergrowth to reach the rugged tableland on top of the mountain by a route which could accommodate a future road”. Two challenges were immediately identified. Firstly, a “modern radar technology than the SA Air Force possessed would have to be employed to meet the stringent conditions imposed by the strength of the reflections expected from the surrounding terrain”. Secondly and equally important, “a suitable all-weather access road to the site would have to be constructed”.

The construction of the Rohrbeck road was a no-mean feat. The Provincial and civilian contractors declared the proposed construction to be infeasible. Convinced of the possibility, in November 1955, 1 Mobile Construction Flight from 100 Aerodrome Maintenance Squadron at AFB Waterkloof, under the stewardship of WO1 W.P.C. Rohrbeck. In February 1957, a five-kilometre gravel road was completed and declared ready to accommodate a mobile radar and other communication equipment which have to be deployed on Mariepskop. After a year into the construction of the road, WO1 Rohrbeck suffered a stroke and died in January 1959. In recognition of his efforts, leadership, and willingness to see the job through, the road was named after him. Rohrbeck road stretches five kilometres from the domestic area to the radar site.

Mariepskop or GE/2, as the site was known at that time, was considered purely as a VHF site. However, after several tests and terrain trials with assistance from the CSIR team, permanent repeater stations were erected in the early 1960s. The geopolitics of the time demanded that the Air Force source a radar capable of long-range coverage with appropriate moving target indication capabilities.

In late 1961, Rohrbeck road was extended to accommodate long vehicles and tankers providing logistical support to the site. Soon, SABC erected a TV broadcast station as well. It was 1 Air Defence Unit Detachment that was the first to move in and eventually man the station. Members utilised tents and occasionally made use of the Department of Forestry's buildings. Later, Public Works Department built a domestic area. By this time the personnel stationed at the stations numbered over 450, comprising permanent force, citizen force, national service, Atlas, and civilian members serving as fighter controllers, radar operators, technicians, weather, security, administration, messing, stores, and medical personnel. Many were housed in mess accommodation and others in married quarters and houses.

It was upgraded to a Sector Control Centre (SCC) in 1981 and renamed the Lowveld Airspace Control Sector in August 1984. Col E.J. McCloskey was appointed as Officer Commanding in January 1989 and in that August the unit moved to a new complex at AFB Hoedspruit while the Mariepskop radar station became a Reporting Post for the SCC. The AFB Hoedspruit complex was officially opened on 30 November 1990.

In many occasions, the objectives of the Unit were realised. A number of unknown aircraft into the country’s airspace were identified including the incidents of 1981 and 1986.

On 8 July 1981 Lt Adriano Bomba of the Mocambique Air Force flew his MiG 17 from Maputo towards South Africa and was intercepted over the Kruger National Park by two Mirage F1AZs from 1 Squadron on a training exercise and instructed to land at AFB Hoedspruit.  He requested political asylum and the aircraft was later returned to Mozambique.

During the night of 19/20 October 1986 a radar operator on duty detected an aircraft on the Lusaka/Maputo corridor and began tracking its movement. At a point north of Komatipoort the contact disappeared from the radar and was presumed to have descended fore landing. Early in the morning the unit was informed of an aircraft crash and helicopters were requested for the casevac of possible survivors. The tragic truth was soon known that President Machel of Mocambique was on board.  That same morning the unit compiled a preliminary report with the track data sheet for the Air Force Command Post.  The unit was subsequently instructed to compile track statistics for the previous year of all flights which had flown the same route.

Another milestone in the history of the Unit was the SAAF held its first Exercise “Golden Eagle” in August 1985, the first of many in which the air defence capabilities of the air force were tested.

The historical mandate of the Mariepskop site has always been about providing “effective protection and policing of airspace, improved air safety by monitoring of airspace because of increased flying activity, and an efficient use of the country’s airspace for the military as well as civilian use”. Accordingly, the Mariepskop site has remained true and steadfast to its roots whilst receptive to the contemporary air defence monitoring.