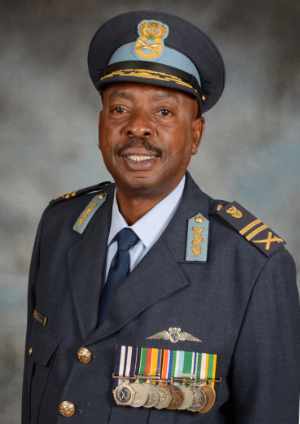 Major General Gerald Malinga was born on 18th May 1957 in Alexandra, east of Johannesburg. He grew up and cut his political teeth in South West Township famously known as Soweto. Like all young social/political activists of his time, the apartheid regime forced him into exile in 1976, a year after joining the Azanian Peoples Liberation Army (APLA), the armed wing of the Pan Africanist Congress (PAC). Born into a Pan Africanist family, he became an ardent proponent of Pan Africanism and when the uprisings of 1976 caught fire, he was already active as an underground operative in the APLA ranks with his political consciousness well polished.

He escaped the brutality of the apartheid security service via Swaziland through to Mozambique and settled in Tanzania. In January 1977, a group of 22 young freedom fighters left for Nigeria in order to receive training as military aviators. From the onset it was understood that for a successful struggle, liberation forces needed a variety of skills. However, the political and economic dynamics facing most liberation movements rendered such training impossible; training military pilots was expensive and the party could not afford it. Like others, he ended up training and qualifying in June 1980 as a commercial pilot, flying the Beechcraft King Air and Cessna 410 and a National Diploma in Commercial Aviation Operations. Even though he had always been an aviation enthusiast, he equipped himself with other crucial skills. Through the Desmond Tutu Foundation, he enrolled and graduated with a Bachelor of Business Administration and System’s Analysis. (Computer Science).

The dismantling of the apartheid colonialism in the early 1990s saw many sons and daughters of the soil freely crossing the borders back to the motherland. The mission to liberation the country’s citizens had not changed but required a different tactic. Coming back to the country meant that many could finally pursue their almost shattered dreams. General Malinga had always wanted to fly for his country and the integration process granted him an opportunity to live his dream and in 1995 he integrated into the South African National Defence Force as a Lieutenant Colonel. Surprisingly, he had hoped for the lower rank of Major which would have allowed him more time in the cockpit. Flying for his country had always been his dream and passion but as fate would have it, we do not always get what we want. Unfortunately for him, the (previously white reserved) Air Force needed immediate leadership transformation. 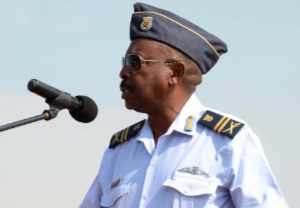 Even though General Malinga admitted that in the mid 1990s the SAAF had not changed much, he found the organization to be highly professional. Of course, the cockpit remained largely white and negative racist tendencies still existed. These were just some of the hurdles that most integrated personnel had to overcome.

Soon after a successful completion of the Officers Formative Course in 1996, he was placed at 41 Squadron where he flew the Cessna 208 Caravan and Beechcraft BE20 King Air and was appointed as its first black Officer Commanding in 1998. With that appointment he also became the first black officer to command a flying squadron in the SAAF. In 1999 General Malinga completed the Air Force’s Senior Command and Staff Course which prepared him for promotion to the rank of Colonel in 2001 and subsequent transfer to 21 Squadron as a line pilot and then Officer Commanding in 2002. He was promoted to the rank of Brigadier General in 2004 as Director Education Training and Development and it was not long before the Air Force came knocking again - a year later the Air Force promoted him to Major General as Chief Director Force Preparation.

Some may argue that this was transformation at best. It however meant that he could not adequately make any significant contribution or impact in the formulation, implementation and monitoring of policies in all previous appointments. He regretted having missed such an opportunity to make visible and meaningful change and believed that when “in positions of power in terms of decision making, one ought to bring about positive change”. He also did not believe in blind transformation. “I stressed on policies, strategy and plans. With proper succession planning and skills transfer, transformation and continuation is possible”, he added. 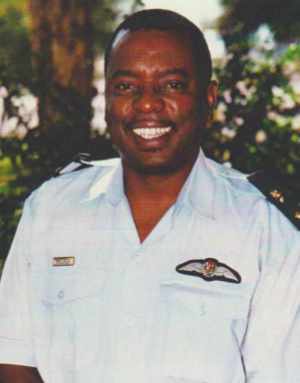 As transformation at the top echelons of the SAAF was slowly taking shape, similar efforts were required in terms of having more black people undergoing pilot training. The current crop of aviators at the bases’ and squadrons’ leadership is testament to the bold decisions taken in the early 2000s. According to him, several proposals that would have addressed the SAAF’s training model were ventilated but not adequately exploited and explored.

In 2006, he joined Chief Joint Operations (CJOPS) as Chief Director Operations Development. He returned to SAAF Headquarters in 2010 as General Officer Commanding Air Command and in November 2011 assumed duties as Deputy Chief of the South African Air Force until his retirement in 2017.

Reflecting on the Air Force’s socioeconomic contribution to the country’s development, General Malinga believes that “Air Forces are repositories of highly scarce skills. The nature of aviation dictates that one must keep up with technological advancement. But also, the prerequisites from the individuals that are part of the organisation make it possible for them to plough back to the public”.

His view is that “an Air Force can be strategic as much as it is tactical and technical.  When defence industries, aerospace industries, aeroplane manufacturers, components and services thrive due to the demand from the Air Force, it creates more employment but also exposes previously disadvantaged population”.

At 63, General Malinga remains readily available to serve his country. He is currently part of the Military Aviation Authority Task Team which is charged with establishing a military aviation authority that will regulate all military aviation matters.